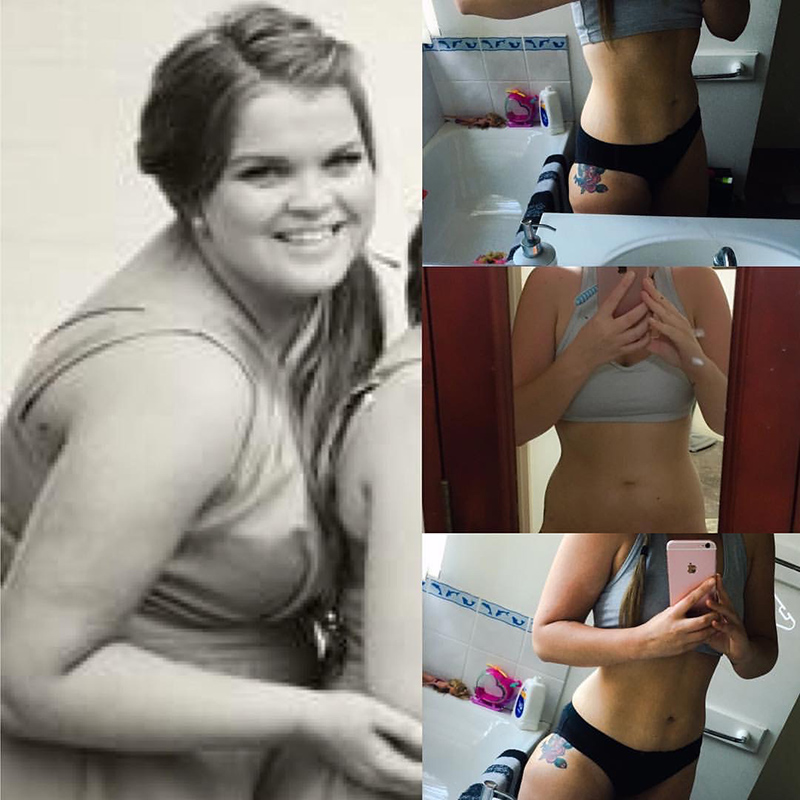 Looking back over the past three years with Ben, I am overwhelmed with many emotions. Seeing and knowing how far I have come mentally and physically is quite surreal. I’d like to blame my emotions on being 35 weeks pregnant and recently watching my almost five year old daughter start kindergarten but unfortunately I can’t.

My journey started after separating from my daughter’s father. Avoiding mirrors and scales was becoming impossible so I hesitantly took that small step onto the scale.

Forever burned into my memory is a  flashing 98.9kg. An instant state of shock took over for around two weeks where I continued eating my feelings and not face the problem.

One morning something within me had enough of being unfit, unhealthy and miserable. I wanted my daughter to look up to me and feel proud of her Mum and see me happy.

I had trained with Ben for around six months approximately two and half years earlier before the birth of my daughter. By nature I am a rather stubborn human being and I knew from my previous training with Ben that he could handle this trait and continue to motivate me when I had none left.

The night before my first session back with Ben I set a somewhat unrealistic goal of 65kg. I remember when I told Ben that 65kg was my goal weight and although he believed I could do it, he still laughed and said, “Bro, there will be nothing left of you!”

Ben seemed almost more invested in my health and wellbeing from the start than what I was. He would check in and book in a time every week with me and make sure I was eating right. I would even hassle him whilst I was grocery shopping, not that he ever cared.

As time went by I started noticing changes, especially mentally. I had struggled with insomnia on and off for a couple of years, medication didn’t work for me nor did herbal remedies.

Combining my new found love for a strict exercise routine, healthy eating and meditation sleeping became much easier. Having a full night’s sleep was the best feeling. This quickly turned into a few night’s in a row then weeks and months. Personally this was my first success and added to my addiction of training.

At the start of 2015 I had my tonsils removed. Even though I still trained whenever I had tonsillitis it was the first major set back I had faced. Keen to get back into my training I was out of action for only two weeks.

A week later I fractured my mid foot during grading trials in netball. Ben went above and beyond a personal trainer and continually checked in on me. I returned to training with Ben two weeks after fracturing my foot with a moon boot now attached.

Ben altered and changed my workouts every week so that I was able to still to train. During this time my upper body reaped the benefits. Focusing mainly on exercises where my legs didn’t feel too much downward pressure, Ben combined a lot of body weight exercises and weights.

He would stand rather close to always remind me to tell him if it hurts or is uncomfortable. He definitely had his work cut out for him as my stubbornness was rudely adamant and I was not going to allow this set back effect how far I had come.

After eight weeks in the boot I lost a lot of muscle strength in my left leg. However it didn’t take long to regain that strength and return to my normal workouts and those evil time trials.

Somehow I managed to continue toning and losing weight through this period. In fact it wasn’t long after having my boot removed that I reached that ridiculous 65kg goal I set myself. A total fat loss of 33.9kg.

This wasn’t the best part of my journey though, the best part has been my complete lifestyle change. My mind is so much clearer, I have more energy to do things with my daughter and partner and I just enjoy life more than I ever have.

I have just stopped training at 35 weeks pregnant. I weigh less at this point in my pregnancy than what I did before I even fell pregnant with my daughter. I’m still fit and healthy and my pregnancy has been fairly easy.

Trying to find a way to describe my appreciation for the commitment and hard work Ben Tellis put into my journey is difficult. There is no way I would have reached that 65kg goal by myself nor would my life have turned completely around.

Even when I train by myself I can hear the things Ben has said to me over and over, it is basically like having him next to you all the time. If I am ever unsure of when trying a new exercise, he explains it again in a different way and always demonstrates.

He also stops me if I am doing it wrong as well. I find this to be one of his winning attributes as a trainer as I now take pride in knowing that my body is in the right position and that I have the right technique when doing weights. His dedication to his clients and his job is next to none.

Can’t wait to continue this journey with Ben and see where it takes me.