MY GOOD DEED FOR THE DAY 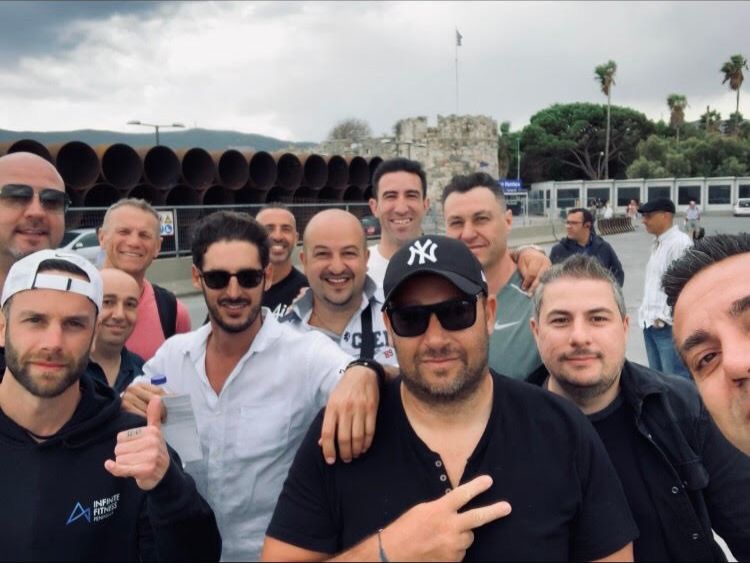 MY GOOD DEED FOR THE DAY

Some of the crew ready to catch the boat to Rhodes
As I mentioned the other week I spent some time in Greece on holiday soaking up the sun and eating ALL the food. As well as taking a break from work, I was also part of a wedding over there. My cuz finally decided to pull his head in and tie the knot and I was lucky enough to be one of his groomsman.

So as per tradition a bux party was organised. The fun was going to be had over a 3 day stint in Rhodes one week before the wedding.

Not a bad way to spend a weekend you could say.

So, on the Friday 20 blokes rock up by boat and before any of us had settled in, the open bar at the hotel was soon taken advantage of. Right next to the bar was a huge swimming pool with the ocean a stones throw away in the background.

It was a nice set up.

Wasn’t long before we were all happy drunk (some worse than others) and our self control and senses were starting to slip a little. At this time I was pretty good, just pacing myself like a true pro knowing there were a long 3 days ahead.

One of the boys brought along a footy, rugby ball and soccer ball so eventually the pool was taken up by all of us, drunk, throwing and kicking balls around. What could possibly go wrong?

You could say I was in my element. We all were. In Greece, 30 degrees, by the pool, free piss, with 20 mates having a great time.

So as I sipped on my tequila sunrise in between a kick to kick sesh across the pool filled with other tourists my targets become a little more daring. The distance between my boys on one side of the pool and the boys on the other side was increasing and so was the difficulty of getting the ball to each other.

When you’re not sober though you don’t worry about things like that. The ego had taken over by now and so did the tequila so I attempted a 50 metre bomb across the other side of the pool fully confident I could reach the boys on the other side (and not hit anyone else in the process).

I’m never wrong. Ever. But this time I was.

I sprayed the kick sideways and wasn’t even close to my target. Instead I hit a lady relaxing on her sunbed minding her own business. F**k!

While the other boys were laughing I was just hoping she didn’t think anything of it and a quick apology would suffice. I was wrong again.

Up she got, head turning around to see who the culprit was. I was so sure she wouldn’t see me hiding behind my plastic cup as I sipped on my beverage – It was a fool proof camouflage. Wrong again. She spotted me alright and to make matters worse she calls management over to complain. I thought – here we go, for f**ks sake lady come on. Can’t I just enjoy my day and hit people every now and again with balls? Clearly not!

One thing I didn’t mention was this lady wasn’t in the best shape of her life prior to the ball hitting her. I say this with all due respect but she was the biggest person I had ever seen in all my life. And I don’t mean in height. I’m talking width. She was morbidly obese and could barely get off her chair to complain about what had happened.

So after seeing management come over and watch her complain, I was pissed off because clearly I didn’t mean to hit her. Surely an apology would be enough! Doesn’t she have better things to do than go out of her way to complain? And what was management gonna do – Kick me out? Pfft

Anyway we got told to pipe down and subdue our activities and also be respectful of others… whatever!

It didn’t last long before the 50 metre bombs came out again haha but we were a little more sneaky with our timing this time around.

I did eventually go over to the lady (reluctantly at first) and formally apologise. She was from Germany and seemed nice but clearly had underlying issues as was evident by how much body weight she was carrying.

So, what was supposed to be a quick apology turned into a long conversation about work, life, holidays etc.

It got brought up that I was a personal trainer so I offered to write her a program she could start and gave her some tips on a step by step process to living a much healthier life.

She accepted and was very grateful for the fact I took the time to talk to her about it. All is well that ends well I guess!

Moral of the story is – get drunk, kick a ball, hit someone and then say sorry. It’s a great conversation starter.

Seriously though we’re all in this together. It’s just a matter of networking and finding it out.